You are here: Home / Reviews / If You Like A Keurig Coffee Maker, Are You A Bad Person?

Did you know that today in the United States, coffee is a multi-billion dollar industry? One in every four Americans owns a single serve coffee machine and sales are continuing to increase. Their popularity comes from their ability to brew a cup of coffee faster than ever.

Tweet: Why, then, do Keurig coffee makers have such a bad rep in the eyes of real coffee enthusiast? @ibeautifultaste

The choices of flavors in most K-cups aren’t powerful enough blends for real coffee aficionados, and they complain it tastes more like instant coffee. They also claim the water doesn’t get hot enough to brew a genuinely strong cup of coffee. Can you sense any bit of coffee snobbery involved here or just them knowing their craft?

With all that the biggest complaint against Keurig makers are the amount of waste they generate. The trash from the non-reusable K-cups is considerable. We will talk about that issue in depth further down.

Back to our original question if you like a Keurig coffee maker, are you a bad person?

Not according to our fellow Americans, who love these machines as well but the inventor now “feels bad” for inventing them. Why, you ask? The reason behind his “bad feelings” is that these machines produce a tremendous quantity of waste with their non-recyclable K-cup single-serve coffee pods. In 2014, it was estimated that all the Keurig pods buried could encircle the world a dozen times.

The Keurig Green Mountain Company takes the complaints of excessive waste seriously and has pledged to create a fully recyclable version of its primary product by the year 2020. They do provide the My K-cup version for some models in which you can brew your coffee grind and reuse the cup daily. Meanwhile, inventor John Sylvan sold his Keurig shares in 1997 because he felt bad he ever invented it.

If You Want a Single Serve Coffee Brewer, Go for It!

Are you still interested in the convenience of a single-serve coffee maker to simplify making coffee on demand? Here are the five top rated Keurig coffee machines for home use to consider:

Let’s take a closer look and review the pros and cons of each of these top five coffee makers from Keurig. 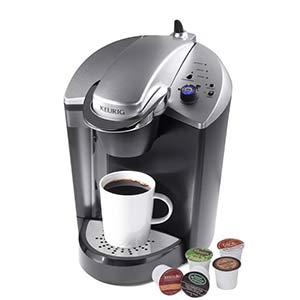 The K 145 comes with the convenience of a detachable 48-ounce water reservoir so you can fill and clean it separately. The drip tray is also removable for easy cleaning, as are all models’ trays. It is versatile with its acceptance of many flavored K-cups including lemonade and tea. It makes three size cups of six, eight or ten ounces, though the taste does weaken with the largest size. The eight ounces one is the go-to size for most.

It brews a fresh cup in less than a minute. This machine has been a hit with American coffee drinkers who considers efficiency as a high priority. It is build to last, is energy efficient, and has a heavy-duty power cord. Originally designed for the small restaurant or office environment, this brewer has staying power and is extremely low maintenance when used at home.

One drawback users complain of is its noise. It gets a little loud but only lasts for less than sixty seconds. Another complaint is that this model can’t use MY K-cups, so you can’t use your own grind. If you want to select your own ground coffee, get the K 45 model instead. 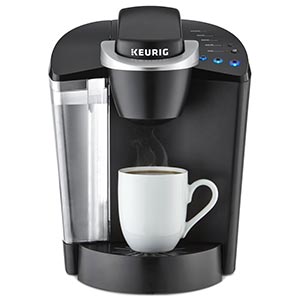 This machine’s setup is quick and easy. It is famous for its no-hassle daily operation. The detachable 48-ounce reservoir is easy to clean and fill. Plus it holds enough water for up to five eight-ounce cups of java. Though it is equipped with Quiet Bow technology, it is still fairly noisy. The auto turn off feature turns the brewer off if it is left unattended for a significant length of time.

If you prefer your own ground coffee, simply remove the holder for K-cups and put the one in for ground coffee. When you first use this, the taste may be somewhat weaker; all you need to do is adjust until your coffee is the strength you want. You also have hundreds of other flavors from which to select. Another benefit you can make plain hot water for oatmeal or use with a tea bag. The K 55 is very versatile.

The one drawback is that the K 55 doesn’t feature its own descaling, so you have to clean it yourself with distilled white vinegar. But for a working couple or roommates looking for a coffee maker, it is ideal. It is the go-to machine offered at a perfect budget price. 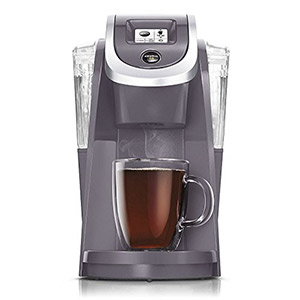 The K 250’s initial setup and cycle routine are easy to do. You also receive filters for installation in the reservoir to prevent the accumulation of calcium, which can affect the taste of your coffee. The K 250 has a touch screen in black and white that allows you to choose your brew size and control the strength of your cup of coffee. The rest of its operation is similar to other Keurigs. Just pop in a K-cup and make your cup of coffee.

You can also brew, even more, thanks to a separate pod for K-carafes that are much bigger than a K-cup pod. Three sizes are available which are the K-cup, K-mug, and K-carafe. This offers much more flexibility of brewing than other Keurig machines. You can only use K-cups and not third party cups. It rejects any brand that is not Keurig.

For a bigger brew size and versatility, the best value in makers is the Keurig K 250. Please note it also doesn’t work with older Keurig K-cups (specifically those manufactured before January 2014). 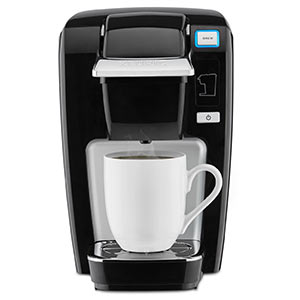 This brewer doesn’t take much space, as it is the most compact of all the Keurig coffee makers, making it ideal for dorm rooms and small apartment spaces. The set-up is simple – just add water and press the brew button. It brews six, eight or ten ounce cups. Minimal cleaning is required with a descaling agent (such as vinegar). Brewing is simple and can support K-cups and third party brands so you can choose from a wide variety of flavors. You can also brew hot chocolate and tea with it. You can also use the reusable MY K-cup with your favorite ground coffee in it.

The main drawback to the K 15 is that it can’t store any hot water and so has to reheat for each new cup, making it take a little longer to brew than other models. You also can’t control the strength of the coffee either.

This brewer has a removable 80-ounce reservoir, which is Keurig’s largest. It features a touchscreen, which is feature rich. The setup is simple, and the screen is responsive to touch. You can brew large amounts of coffee, including K-carafes with 22 to 30 ounces of java. K-cups from four to 12 ounces are also possible. Brewing a cup takes less than a minute and a carafe in less than five minutes.

You can also program the brew strength and the high altitude settings. Finally, you can choose your brew temperature and schedule your machine to turn on and fill a carafe at a particular time. It even allows you to select the language. It won’t accept other brands of K-cups but will take reusable pods for ground coffee. This brewer is for the hardcore coffee lover who wants more control over brewing each day.

Tips on Making Better Coffee with a Keurig

Some complaints exist about the quality of coffee brewed by a Keurig brewing machine. Should you experience any concerns, here are a dozen tips from other users on how to get the best coffee brew from your Keurig.

The Keurig makers are convenient for making single cups of coffee quickly at home or the office. Easy to set up, use and maintain, they also offer a variety of brews and flavors to suit any palate. If you are concerned about the waste of the K-cups and the environment, select a model that allows the use of the reusable MY K-cup filters and your choice of ground coffee that lets you wash and recycle the filter daily. You might be surprised, like millions of other Americans, might love the flavor and convenience of a cup of Keurig coffee.­­­­­