In our last post, we introduced a new series called Espresso 101. We introduced our new article series on all things espresso by answering some common questions for beginners and will be talking about the history of espresso and espresso machines today.

Our brief history lesson will help you on your way to becoming an espresso master.

Why was the espresso made?

Following the Industrial Revolution in the 19th century, people started getting used to producing things much faster than before. Tasks that once took hours or days by hand could be completed in a fraction of the time with a quality machine.

During this time, coffee was popular throughout much of Europe. However, cafés hadn’t quite caught up to the fast-paced production of the Industrial Revolution. Often, Coffee took five minutes to brew and that doesn’t involve the time it took to wait in line. In this amount of time, you could be balancing your chakra and doing some meditation. You could also boil an egg and have breakfast with your coffee in five minutes. Trying to reduce the time to make this delicious drink, inventors began experimenting by brewing with steam. Café owners wanted an expressway of serving coffee. The Italian word espresso means “express.”

There were lots of failed attempts to create a machine that could produce quality coffee more quickly. Why was this so difficult? There’s a lot of precision at the molecular level that happens when an espresso is prepared.

Water at the right temperature needs to be forced through the perfectly ground and tamped coffee beans at the right pressure to achieve perfection. That’s why good machines and technology are so important, but it’s what makes the process difficult.

An Italian named Angelo Moriondo granted the first patent in 1884 for what would later become the espresso machine we know today. Moriondo’s machine had a broiler which heated to a mere 1.5 bars of pressure and pushed water through coffee grounds before finishing it with steam.

Despite being the first step forward into express coffee making, the machine ended up going nowhere. Moriondo built the device only to brew large quantities of coffee more quickly. There aren’t any models or prototypes still in existence and photographs don’t exist. 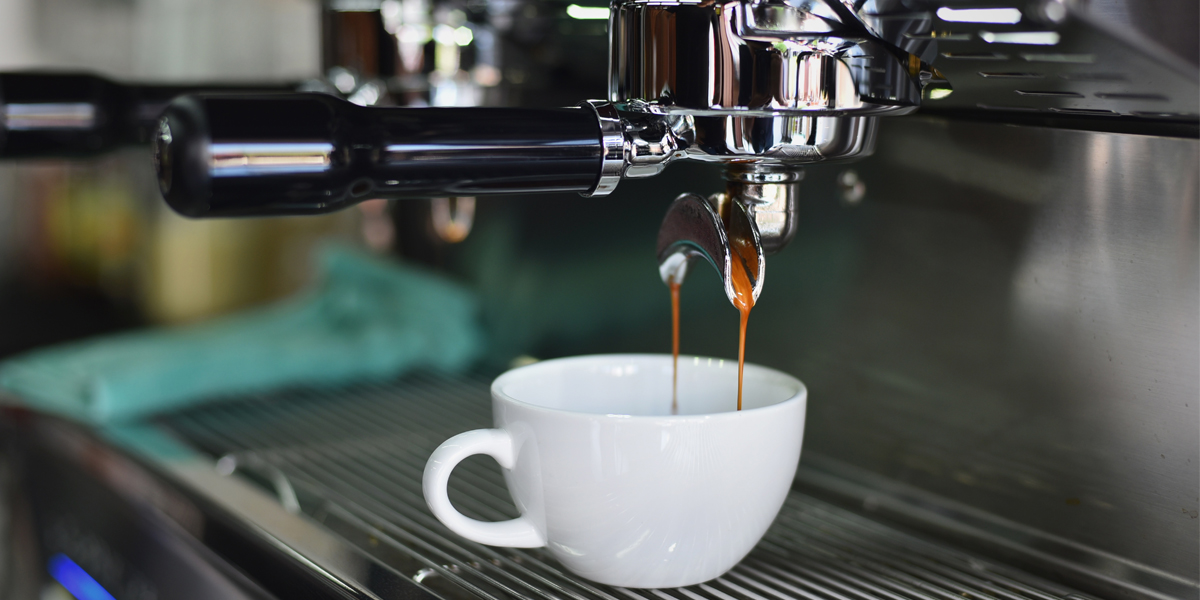 How did the espresso machine become popular?

Two other Italians, Luigi Bezzera, and Desiderio Pavoni worked together to make improvements upon Moriondo’s machine and make it popular. Bezzera was an inventor in Milan, and in 1901 he registered a patent that included the familiar portafilter and brew heads. His machine boiled water until it pushed water and steam through tamped coffee grounds at a perfect temperature of 195ºF.

Finally, this was a real espresso machine. A customer could order a coffee that would be made just for him in about 45 seconds. However, the main was heated over an open flame and the problem was that it was difficult to control pressure and exact temperature.

The reason this was an issue was that it meant every shot of espresso came out a little bit different. In other words, it lacked consistency. Bezzera didn’t have the money to make a lot of machines or expand his business. However, Pavoni purchased the patent a few years later and had the money to make these things happen. He invented the first pressure release valve, the steam wand and called this new machine the Ideale. Bezzera and Pavoni worked tirelessly to perfect their machine.

At the Milan Fair in 1906, the world discovered real espresso—and people loved it. Pavoni continued to market his machines while Bezzera became less known. Within the next two decades, Italian cafés became like bars for workers looking for a shot of caffeine.

How did the Ideale become the espresso machines we know today?

Pavoni’s machine could make around 1,000 cups of coffee per hour. However, the steam power often bittered the coffee and couldn’t manage past two bars of pressure. It seemed that no one could solve this problem, at least until Achille Gaggia came along in 1947.

Among the innovations that Gaggia is responsible for is the thing we all love most about espresso: the crema. The thick, oily, heavenly foam bed atop the liquid was created by allowing baristas to pump out the coffee with a hand-lever that generated an unprecedented eight to ten bars of pressure. This is where we get the term “pulling a shot” from.

A year later, Ernesto Valente bought Gaggia’s machine and began to work on a series of cheaper, more accessible machines. In 1961, Valenta began selling the famed Faema E61. It’s a semi-automatic machine that, among other things, made the popularity of neighborhood cafés soar. The smaller size, stainless steel finish, and motorized pump make it the closest thing to espresso machines sitting on your local café’s counter today.

A lot of improvements have been made since the Faema E61, but the basic structure remains the same. Many machines are outfitted with fancier technology such as computers and Bluetooth technology in JURA machines. Now, my tiny espresso machine at home can muster up 15 bars of pressure and steam and froth milk on the side.

The current machines on the market do the same thing. They give us a shot of liquid hugs and extra energy when we need it the most.

Espresso machines are cool. I want one!

If our beginning posts on espresso have inspired you to become an espresso connoisseur, then sign up for our email list.

Next, we’ll be giving you tips on what to look for and how to choose the best espresso machine for you. After that we will be releasing a full guide on pulling the “godshot” at home.  Make sure to sign up for the email list.

Zach has a man bun, rides a fixie, doesn’t wear shoes, and recently moved to Denver, Colorado. Some people might call that a “hipster.” His preferred beverage is the cappuccino because foam is made out of world peace. When not practicing the art of coffee, he practices art in other forms like playing piano and drums, performing slam poetry, photographing people, and cooking for everyone who will eat his food. You can follow his gastronomical adventures on Instagram @zachgoestocollege.